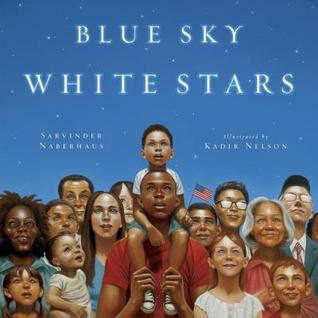 Blue Sky White Stars is a masterpiece both in word and in images that beautifully honors the American flag. Celebrating a nation that is woven together with diversity, resilience, and pride. As noted by the author, Sarvinder Naberhaus, “The story was written as a parallel between America and its flag-the same words describe both.” And she does so brilliantly, sometimes by using homophones and other times using the same exact phrases to describe both the flag and other American emblems. It is illustrated by Kadir Nelson and I marvel at his artistry. His work always leaves me captivated and edified from the first page to the last by his resplendent illustrations. The book ends with notes from the two collaborators providing insight into their inspiration for this work.

There is a statement made in the author’s note as she shares her thoughts that led to the birth of the idea for this book by which she says, “I began this book thinking of the deep blue sky dotted with white stars that early immigrants to this country saw as they boarded ships headed towards religious freedom in the New World.” And I get it. I can imagine this may have been the sentiment conjured for many early immigrants to America but I can’t help but think about what this same deep blue sky dotted with white stars meant to those aboard entirely different ships. Those who were stolen from Africa for profit through the slave trade. It made me further think of those who flee from other countries because of persecution, seeking asylum in the United States. It made me think about what I hope our flag still stands for. That all are welcome. That those who seek refuge might find it here. That the dream is still alive and well and accessible to all who call America home.

The beauty of this book is that it gives me hope because it celebrates the America that we all want to believe in. While I didn’t expect to react this way, I am thankful that it inspired these thoughts. It really made me stop and think about what the flag means to me. As Kadir Nelson said succinctly in his note to the reader, a sentiment to which I can agree, “The American flag is a shining symbol that calls us to remember that we have the potential to uphold the promise of ‘Life, Liberty, and the Pursuit of Happiness’, together. Only together…”

Sarvinder Naberhaus | Link to her blog with lots of great information about the creation of Blue Sky White Stars: http://sarvinderauthor.blogspot.com/

Thank you for for Stopping by